My parents will soon be going home to Sweden, so today we made a last little trip. The destination was the small mountain village Chuandixia (川底下) which is two hours west of Beijing by car. In the morning I talked to one of the “freelance” taxi drivers outside of my gate, gave him a look at the map and asked how much he would want to take us there, wait three hours and then take us home. 260 RMB. We jumped in but not having travelled 100 meters he realized he didn’t really know how to get there and called another driver. We waited a while for the new guy to get out of bed and then switched car to his flashy new Volkswagen. He didn’t think 260 RMB sounded to good and wanted 300 RMB which was OK with us. Off we go!

The town is made up of a few hundred buildings thrown up on the foot of a mountain. Since the Ming dynasty this town has been so backwards and uninteresting the houses haven’t changed much at all. When someone discovered this they made the town into a living museum and began charging for entrance. Today both the inhabitants and the tourists were very few so it was quiter than any other place I’ve been to in China so far.

Some of the buildings are very worn down, but there are still many left in good shape.

It’s not only ancient architecture that has been preserved, slogans written on the walls in the Mao era are also left intact. 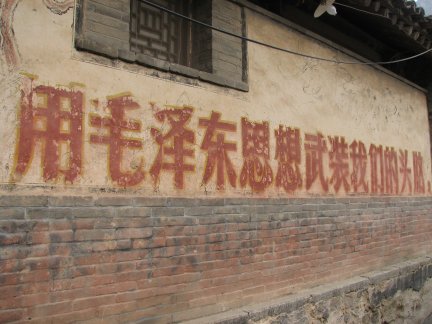 I’m not positive, but it means something like “Use Mao Zedong’s thought to arm ourselves.” If you know what 头脐 means, please leave me a comment! On the next wall was written “Workers of the world, unite!” Perhaps a lot of people associate this kind of thing with China, but this is actually the first time I’ve seen it in these six months. It seems that ideology isn’t very fashionable in the modern China.

On the way home our driver was complaining that 300 RMB was too little and that he hadn’t realized how far it was. This was probably partially true since the first guy we made the 260 RMB deal with told our second driver that it wasn’t very far, not taking much notice of the distance on the map. Taxi drivers (not just “freelance” drivers) occasionally (try to) trick me in different ways, but I figured 300 RMB was a bit on the low side and offered him 400 RMB. Suddenly he wanted 600 RMB which was plain ridiculous so I just said it was to expensive and we didn’t discuss it anymore. When we arrived back home he again started whining about the 400 RMB I gave him, so I began delivering the prepared “we already agreed on the price” speech. He interrupted me half way through at which point we just walked away. Haggling is very common in China, but trying to double an already negotiated price is just insulting.

Check out my Chuandixia flickr set for some more pictures.